People often tell me that they can’t understand what is going on with them. They used to be really nice and calm and now they feel like they want to fight with everyone. They get irritable and frustrated. They slam doors, kick things and have a nagging desire to throw things against the wall, throttle their boss and one of the all timemfavourites – throw their computer out of the window. People tell me how they fight with their partners more, and lose patience with their kids. Basically turning into some kind of Frankenstein monster…

So are you undergoing a personality change?
No! Your primal instincts are just kicking in.
Thousands of years ago, our ancestor’s only exposure to stress was when their lives felt threatened. As soon as this happened, their bodies released adrenalin which caused them to have a fight or flight response.
This meant that they could either fight the danger or run away from danger.
You get stressed, release adrenalin, fight off the danger (the charging antelope or the hungry lion) and you live happily ever after…
Wonderful stuff!
So we have still have stress (and lots and lots of it!) but it is no longer life threatening. And our good old body still releases adrenalin because it can’t tell the difference between life threatening and non-life threatening stress. And we get frustrated. And then we get irritable, and then we become angry. And before you know it, you are like a raging bull. Which is 100% normal, believe it or not.
It feels horrible and uncomfortable because it is not you. It is the stressed you.

What can you do?
– Firstly understand that your anger is a result of stress. Some people may experience different symptoms. Yours is anger. Deal with it!
– Deal with it by expressing it sooner rather than later. It is much easier to tell your colleague who is sitting at the desk next to your’s that her gum chewing is irritating you than to wait until you are so angry that you confront her really aggressively.
– Back in primitive days, people would use their anger to defend themselves and burn it off. You need to burn it off too. But not by harming people, or the tea set that you got for a wedding gift. Get into the habit of exercising regularly so that you can work off that energy. It doesn’t mean that you have to go to the gym. Walk! Climb stairs! Jump rope, make bread by hand, roll out some pastry, squeeze a stress ball, kick a ball.
– Forgive yourself for being angry, forgive yourself for what you said or did. It was the stress talking. If you hold onto the negativity of what a terrible person you are, then you’re just going to get more stressed and start the whole vicious cycle all over again!
– And above all else, just breathe. Allow yourself to relax.
Because as my good friend says, prison orange is just not your colour! 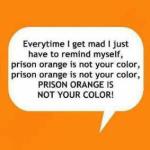