This week in the Jewish calendar, we read the story of Noah and my son came home from school with a great piece about lessons that we can learn from Noah’s ark.
I’m going to share them with you and give you some of my insights for each one.
Everything we need to know about life, we learned from Noah’s Ark…

1. Don’t miss the boat.  Sometimes we are so afraid of being left behind that we never take the bold steps that are necessary to take risks and just go for it.  Your “boat” may be very different from somebody else’s “boat” because everybody has their own goals and aspirations – don’t miss your own boat – that would cause you to have regrets later on in life, saying “I wish that I had…”

2. Remember that we are all in the same boat. No matter how bad you think that your life is, everybody has problems.  That doesn’t mean that your problems are not worthy of moaning about, it just means that you are not the only one who is going through this battle.  Others have been there before you and survived – you will too!

3. Plan ahead! It wasn’t raining when Noah built the Ark. Don’t think that things will just work out on their own.  You need to actively participate in creating your own future.

4. Stay fit. When you’re 600 years old, someone may ask you to do something really big. And exercise is one of the best ways to burn off stress, anxiety and frustration.  You don’t need to be Olympic standard, you just need to get your body moving.

5. Don’t listen to critics; just get on with the job that needs to be done. The number one reason that people don’t achieve their goals is that they listen to other’s negative criticism.  Know this: people will always criticise you if they feel threatened by you – take it as a compliment that you are doing great and they are afraid that you are going to do amazing things that they are too scared to do themselves.

6. For safety’s sake, travel in pairs. Well it doesn’t have to be pairs… but find somebody who will be on your side and who will listen to you.  Don’t be afraid to say “help me” or “I am scared” or “I don’t know what to do”

7. Speed isn’t always an advantage. The snails were on board with the cheetahs. As we learned from the fable of the story of the hare and the tortoise, the fastest people don’t always win.  You often get further by taking it step by step at a comfortable pace than by rushing into something only to burn out before you reach the end.

8.  When you’re stressed, float a while. Be kind to yourself and take time out to relax while you are stressed instead of pushing yourself harder. You’ll thank yourself later.

9. Remember, the Ark was built by amateurs; the Titanic by professionals. Enough said! Don’t ever be intimidated by people who think that they are better than you or who say that they know more than you.  Your way is best for you.

10. No matter how big the storm is, there’s always a rainbow waiting. And you may not see it now, but you will get over this!

I know that this is going to sound crazy – especially since some of you are reading this on Facebook and that my friends call me the “Facebook queen” but I do not like social media.
I’m on it all the time and I have a fear of missing out but I don’t like it.
And I certainly believe that there is an important place for social media in terms with connecting with people who are important to you and sharing information.
But, last week, I was not online at all for three consecutive days and I didn’t miss anything!
Miraculously the world continued to rotate, Facebook didn’t shut down without me and Torvill and Dean didn’t get married!

In our fast paced, instant gratification kind of world that we live in, we often feel that we have so little time and are often thankful for all of the technology that assists us in our lives.  But when that technology starts to control us and actually ends up taking even more of our time it becomes problematic.

Most social media just represents an edited version of people’s lives.
You’re not exactly going to post ugly pictures of yourself or talk about the negative things that are happening in your life (unless you are looking for attention and wanting people to comment on how much they feel sorry for you).
People post their best photos, their favourite stories and their achievements. They tell you what a wonderful life they are leading, often with the pictures to prove it.
Is this real life?
Not at all.
People don’t even speak spontaneously anymore. Rather, they think about what they want to say, and how they think that people will interpret it and then present a highly edited version of their original thought.
And where does that leave you when you are already feeling stressed or depressed?
It makes you feel inadequate or inferior.
It makes you feel that you don’t do enough, or achieve enough or live an exciting enough life.

If you are stressed or overwhelmed by what you see others doing or by how you feel others are judging you, take a break from it. I promise you that you’ll feel better for it.
Let me tell you this: Your life is so important!
What you do is valuable and meaningful!
Don’t ever get caught up in the belief that you are worth less than somebody else.
Be true to yourself, live in the moment and continue to be blessed by what you do have.

I spent a large amount of my life dancing.
In fact, I still do, because I would always choose dancing over walking if I could.  I get used to the stares when I pirouette in the aisles of the supermarket.
Though, now that my kids are older, they insist that my dancing embarrasses them (I’m not going to stop though – it is who I am).

As a dancer on ice, I spent a lot of the dances skating backwards, staring into the eyes of my partner (as I learned from the great Torvill & Dean) and hoping that he would not steer me in the wrong direction or into the barrier on the side (not always that successfully).

Torvill and Dean skate Bolero in the 1984 Olympics

Nobody dances in a straight line, always going forward – not even line dancers, I’m told.
It would be really boring and if the dancer was on a stage, they would quickly end up off stage or in the orchestra pit.
Yet, we expect our lives to be one smooth, straight path with no deviations, no going backwards, no accidents, no falling and definitely no twisty twirly bits.
Our lives are filled with backward steps, side steps and confusing choreography.
Our lives are filled with times when we are not sure what is going on, and we can’t see where we are going but we have to trust life.
Trust life?
We have absolutely no idea where we are going and what it is all about but we have to trust that there is a greater purpose to it all.
We have to believe that as difficult as things are, they are there for a reason.  We just really don’t see it, or understand it, at the time.

It is time to dance!
Whether you dance physically to just enjoy the moment or you dance spiritually to the unheard rhythm of life.
Dance!
Go backwards, spin around, move forwards – find enjoyment in the moment rather than looking for the destination or end point.
And don’t forget to bow at the end. 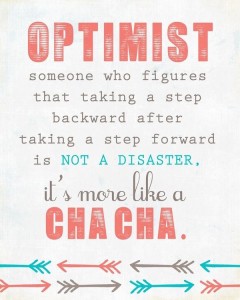 Today I saw an angel!
He was a rather dirty and ragged looking homeless type of angel but he was an angel none the less.  He happened to be ambling leisurely across the road when it was really my right of way so I had to wait patiently for him to move before I could drive.
And what a good thing he was there because if he wasn’t and I would have driven when the light turned green for me, I would have been hit by a driver who obviously thought that red lights were just optional.
I breathed a sigh of relief and then wondered about the fact that a homeless man delayed me and therefore seemed to have saved me from disaster.

I wonder how often we meet angels – people who come into our life for some kind of purpose.
Sometimes, it may be a one minute, random passing and other times it could be somebody who comes into your life for a few years.
The real challenge for us – and let me tell you that I battle with this myself – is knowing when to let those people go.
People come into our lives for a reason and then they go – and that going can be so hurtful and painful.
But we have to be strong enough to understand and to let them go.  Rather than clinging to something that is just not working for you anymore (even if you think it is!)

Another challenge is when you see that “angel” as the “devil” because it seems that they only cause chaos and hurt in your life.
So, why do I call them angels? Because they are still there to teach you something about yourself.  They still have some kind of purpose in your life…
And how would you recognise an angel if you hadn’t met a devil?
How do you understand happiness if you have never experienced sadness?
How do you know light if you haven’t seen dark?

Be open to letting people into your life;  to understanding that some people come into your life for a reason.
Open your eyes to recognise the angels in your life – they may not have halos or wings, but they are certainly there!